Hey, have you heard the news: They did surgery on a grape.

If you’re confused, you’re not alone: this new meme popped up in late November of 2018 and features a confusing sentence with an equally-confusing image:

The sentence is repeated with different intonations, punctuations, and other variations. Usually without context, often to the confusion of people outside the meme culture, “They did surgery on a grape” became an overnight sensation, immediately joining the ranks of other widespread memes like Pepe the Frog, triumphant baby, Mocking Spongebob, “Damn Daniel!”, or Trump’s tweets. 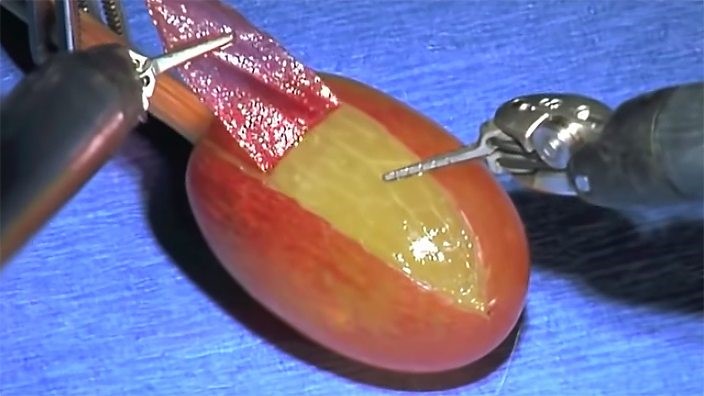 But what exactly is happening here?

The meme originated from a video released by Edward Hospital in Naperville, Illinois. Their purpose was the showoff their new da Vinci surgical system, a highly complex robotic surgical device that allows doctors to perform extremely small, yet precise, cuts and other operations in a minimally invasive way.

To demonstrate just how delicate the machine can be, the hospital released a video of doctors performing “surgery” on a grape. Using the machine’s tiny robotic appendages, doctors were able to remove the skin of a grape with minimal impact on the fruit’s interior.

The video itself, which was entitled “da Vinci Surgical System: Surgery on a grape”, was posted in 2010, almost a decade before the meme. How (or why) the video was found; one can only guess. What we do know, however, was that tech and business site Cheddar was the first known point-of-origin of the term “They did surgery on a grape”.  From there, a screenshot of the video was posted on Instagram with the caption “They did surgery on a grape”. From then on, people copied the term, word for word with slight variations, and posted it in and around comments sections, article titles, Facebook status updates, Instagram captions, and so on and so forth. Parodies soon followed (with my personal favorite: They Did Surgery on a Grape/Thanos: https://www.youtube.com/watch?v=t7UASa0qcCc).

A (meme) Star is Born

The first reported sighting of the Surgery on a Grape meme was spotted in Instagram, on November 22nd, 2018 (hereby known as Surgery on a Grape Day). IG user simpledorito, a known and well-respected meme creator (or meme lord, as the kids call them) posted a slightly edited screenshot of the video with the now-iconic phrase laid on top of the image multiple times in multiple styles. 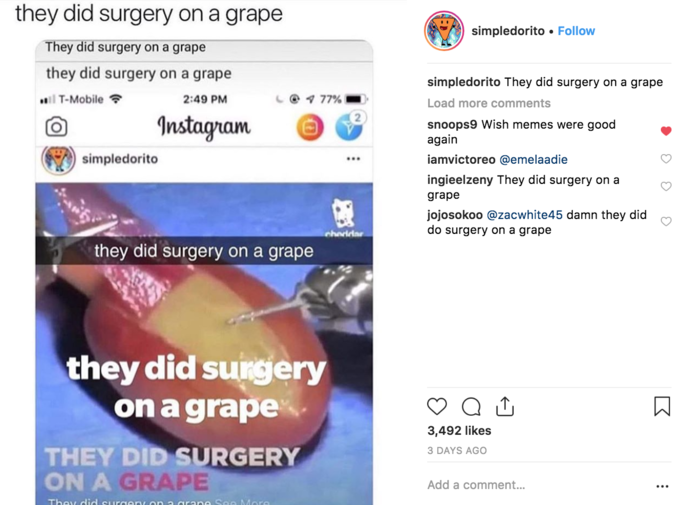 The post received almost 3,000 likes within an hour and was cross-posted on /r/dank_meme, a reddit thread known for being the birthplace of, as its name suggests, dank memes.

The Story Behind the Surgery

What most people overlook, of course, is the story behind the meme. Yes, some people think it’s irrelevant, but it would be a disservice to the amazing technology featured if we didn’t talk about it.

The original video was uploaded by Edward Hospital & Healthcare Services, a major healthcare provider in Naperville, Illinois. They serve the residents of some of Chicago’s largest suburbs and was one of the first major medical centers in the Great Lakes Regions.

As part of their awareness program, Edward Hospital uploaded a video showcasing their then-new equipment, the da Vinci Surgical System. The da Vinci Surgical System is a robotic tool that surgeons use when they need to do highly complex surgeries while maintaining a minimally invasive approach. At the time, the system was revolutionary: it could perform tiny movements to make microscopic cuts, have robotic “wrists” that could turn 360° degrees, and can even function with partial autonomy with the appropriate AI software.

The whole system is controlled by doctors in a separate console, which means that all actions done by the system is still dependent on human input. What makes it revolutionary is that, with the proper internet connection, a working da Vinci system in the hospital, and a competent doctor, the da Vinci system allows for “telesurgery”. This allows foreign doctors to help patients from different countries receive life-saving surgical treatments without the surgeon physically present. In fact, in 2001, they did just that: “Operation Lindbergh”, as it is now called, involved a certain Dr. Marescaux and a team of surgeons in New York performing a cholecystectomy on a patient in Strasbourg, France. The surgery was a complete success, was minimally invasive, and pioneered the way for telesurgery to become a viable option for people in remote areas.

Think about that, a team of doctors performed remote surgery using ROBOTS on an internet connection from 2001. It’s machines like the da Vinci Surgical System that push the boundaries of what we, as a society, are capable of doing.

So ,y’know, keep that in mind next time you see the surgery on a grape meme!

In meme terms, They Did Surgery on a Grape falls under the “copypasta” category, a class of memes that consist of blocks of text that are copy and pasted repeatedly. While usually a derogatory term, nn the Surgery on a Grape’s case, it was a blessing: the simplicity of the sentence, and its general lack of context, adds to the absurdity, and thus facilitates the humor.

But more importantly, if people can see past the comedy gold, this should put the spotlight on robotic surgery. If people play it right, not only can this meme give you a chuckle, it could also raise awareness on medical technology and how it can save lives.

The beauty of this meme stems from the fact that each derivation gives the sentence a different meaning:

Language is beautiful, and so is the internet